Picturesque lawns are difficult to achieve if there is a buildup of thatch. This situation is made worse during the dry periods when your yard may even go dry as a result of this condition.

If there is more than ½ an inch of dead rhizomes between soil and the grass in your lawn chances are you have a thatch problem.

The grass may, at times attach to the layer instead of soil. In addition to this, the plants’ roots are chocked by the induced humidity of this layer.

Insects to find a home in this layer, not to mention the poor aeration as a result of a thick layer. The result of having thatch is an uneven lawn.

Before embarking on the process of getting rid of the thatch, the obvious step is confirming the existence if any and the depth.

This will give a pointer as to the technic to use and an accurate picture of your thatch problem. Each level of thatch has an appropriate remedy.

While power raking offers the most efficient solution to thatching specific, fewer amounts would require the less drastic measure to preserve the integrity of your lawn.

But if your problem is severe power raking is undoubtedly the solution.

Is power raking the same as dethatching? 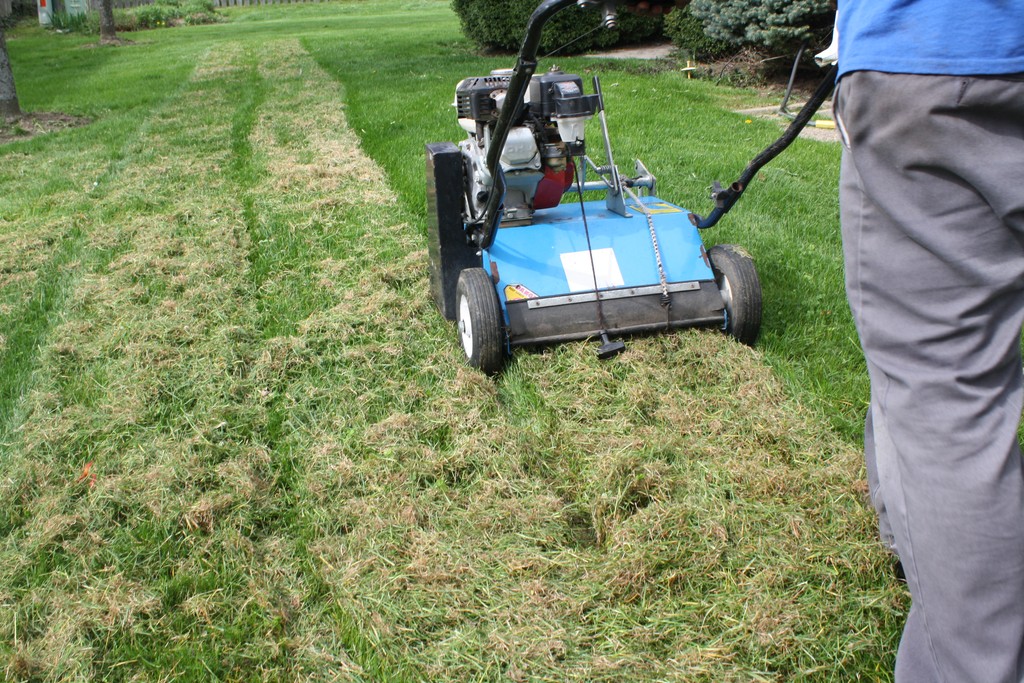 As the name suggests, dethatching is a process of getting rid of a buildup of a layer of dead plants and rhizomes between the soil and your grassroots.

There are several methods of getting rid of this; power raking being one option. While the technic may solve this problem, the meaning isn’t narrowly restricted to power raking. Other conventional raking methods still serve the purpose.

Should you power rake before aerating.

First, it’s important to point out that dethatching itself aerates the soil by removing the chocking layer from the grassroots.

However, most landscapers contend that aeration should be done after dethatching. Considering dethatching itself is favored during conditions (depending on the grass variety) albeit during growth while ventilation is advisable when soil is with moisture.

The difference in timing dictates that power raking should get rid of the layer, then you can work on your earth to improve its air circulation without a layer blocking it.

Can you power rake wet grass?

The cardinal rule for power raking is “do not do it in wet soil.”Power raking is a variation of the traditional raking albeit using powered rakes. Imagine using a rake on wet soil!

The stress associated with the sticky mud clinging on the teeth of your rake will not only be frustrating but not efficient. Also, there is the problem of grass getting uprooted when the soil is soft through your power rake action.

In addition, you wouldn’t want to destroy your lawn in the name of raking; it defeats the purpose. Remember your goal is to rake off of the thatch.

When you compound this with soil, then you have two problems. It is always advisable to power rake in dry conditions. Remember to wear a mask if you are allergic to grass.

There you have it, folks, a quick guide on power raking your lawn. If you are keen on maintaining that picturesque golf-course-like lawn then pays attention to thatching. On top of that if you intend to DIY, then this is the article for you.

link to How to replace your yard grass

Replacing your yard grass means getting rid of the existing one then growing a new lawn.It’s a three-part process–killing the grass, preparing the land, then planting the new grass.Give...

Continue Reading
link to How to Care for a Calandiva Plant

Calandiva (Kalanchoe Blossfeldiana Calandiva) is a succulent native to Madagascar. It is loved for its appealing features, especially its ability to blossom for eight full weeks during early spring...