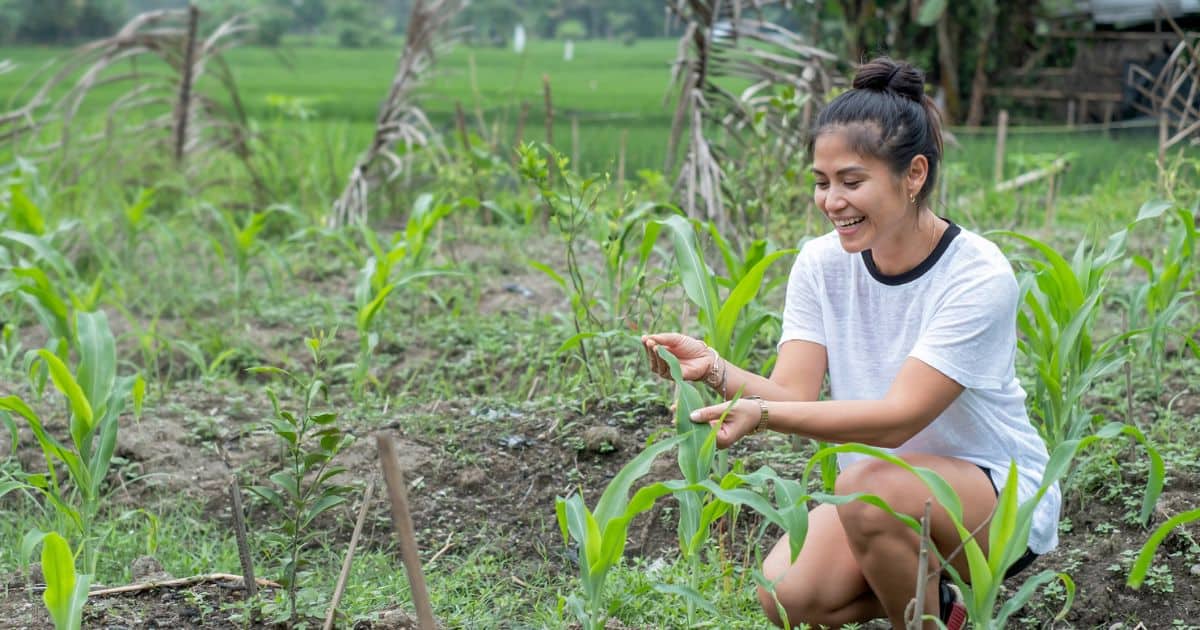 The origin of corn is said to be Mexico. There are different types of cones or maize. They include popcorn, flint flower corn, old heritage corn, and sweet corn.

Corn normally tastes awful in its raw form and is usually grown for other purposes. For example, making flour, stock feed, popping corn, or eating it as sweet corn.

One thing you should know about corn is that it will not perform if grown out of its comfort zones. The best time to plant them is during the warmest time of the year.

Don’t plant the corn too late; when the cubs are trying to ripen, it is winter. Nor plant them too early, making the seedlings suffer while trying to establish themselves in the soil.

Begin by preparing the soil. The section you select should receive plenty of light, has free draining, and the soil should be full of organic matter. The organic matter helps neutralize the soil, making it a suitable environment for growing corn.

Fertilize the soil for several weeks or even months before planting. You will get better results when you leave the bed to rest with the fertilizer for some time than when you fertilize at the point of planting.

Planting the corn when the weather is warm enables their roots to get a good foot holding. This means that the roots will grow down, stabilizing the plant better.

The corn has a shallow root system that would be inherently unstable and most likely fall over if planted when it’s raining. They also struggle in extremely dry conditions when water is lacking.

You should also cite them in a position where they are protected from strong winds. If you experience them, opt to plant higher vegetable gardens to act as a shield. So that they don’t struggle with pollination.

The idea is not to let the corn grow too fast and get spindly because it won’t support itself. Neither will the plant grow to maturity; you can get thick, delicious corn.

Sowing the seeds directly into the garden bed has the added advantage of being able to dig up the seed and replace them. At any time in the case, they get infested by pests or just fail to come up.

Moreover, the corn’s roots go deeper and can develop extra roots. These roots make the plant more stable and secure on the grounds.

One question that most people planting corn usually have is, should I plant in blocks or rows?

Planting in rows helps with pollination. Corn experiences wind pollination. The wind blows the male flowers’ pollen at the top of the stem onto the silk which grows out of the cob containing the female Flowers.

Therefore, growing in blocks gives this process of pollination a better chance. If you don’t have enough space, it is still okay to plant in rows. Especially if you are growing in containers.

If the corn does not receive proper pollination, you will harvest it with a poorly formed kernel and be immature.

The best spacing for maize is 30 cm or a foot apart. Don’t bother growing them close to each other. This is because they will rob each other of sunlight, nutrients, and water. Moreover, when the time comes for harvesting, you will have smaller cobs of corn.

There is also the option of doing succession planting. This is to mean you plant your maize weeks apart such that they don’t mature at the same time. This method is suitable if you live in an area with long growing seasons.

Always grow more corn than you need, even if it develops and you end up with a  lot. You can always preserve it or give it away to family and friends. They will love you for that.

Corn requires regular watering such that they are not strained water. This will prevent early maturation.

Undeveloped fruit corn is usually a result of pests and diseases. You should watch out for the earworm Caterpillar that drills in from the top of the cob through the silk, causing it to rot.

If this happens, terminate the whole corn altogether. You will have prevented the rotting from getting to the other plants, causing more damage.

During the growth process, you might notice some rust-like color on the edge of the leaves of the corn. This should not worry you because it is normal, and the corn can struggle through it.

The trick is to grow corn at the right time, with the right fertilizer, and we’ll prepare the soil. You will have fewer pests and diseases to deal with on the crops.

Sometimes the birds can be a bit of a problem. However, if you planted more than enough, missing corn or two would be of no loss to you. If the birds cause too much damage, scarecrows with bright colors scare them away.

You can always fertilize extra if the plants look pale green. Otherwise, leave them as they are because it is better to under-fertilize than over-fertilizing.

To tell if the corn is ready for harvesting, check if the silk has turned brown. As soon as you see this sign, test the cub by removing a little of the husk at the top and revealing the kernels.  They should be swollen and plump.

If still unsure, rupture one or two of the kernels with a fingernail, and some juice with a milky color should come out. If the juice comes out clear, the corn is not ready.

If you leave the corn for too long in the field, they get starchier and less tasty. However, corn can also dry on the plants and give you the advantage of being able to preserve them.

Especially if you have a glut of corn. You could use them to make your corn flour or feed for the animals. Especially the chicken and the ducks.

After the harvest, use the stalk’s leftovers as mulch in the garden bed. This is because they will break down and make wonderful enriched soil for another crop of corn or any other plant you would like.

When growing corn in containers, use a 4 by 4 block, 16 square feet, to get good pollination. Focus on using a fertilizer with nitrogen to avoid harvesting immature corn. Such as organic matter or well-aged chicken manure.

Pre Soak the seeds a few days earlier to hydrate them. The seeds are going into warm soil, which is a little dry, and the hydration will increase the germination rate. Once planted, at least water the corn once a week.

Since it’s a small garden, go half the required distancing space. You could let the corn fully mature in the container or transfer them into the garden once they are old enough.

To conclude, corn is a type of grass, meaning it requires a lot of sunlight for photosynthesis. Ensure you cite them well. And since it’s your garden, nobody should question you unless they are being corny while asking for some corn.