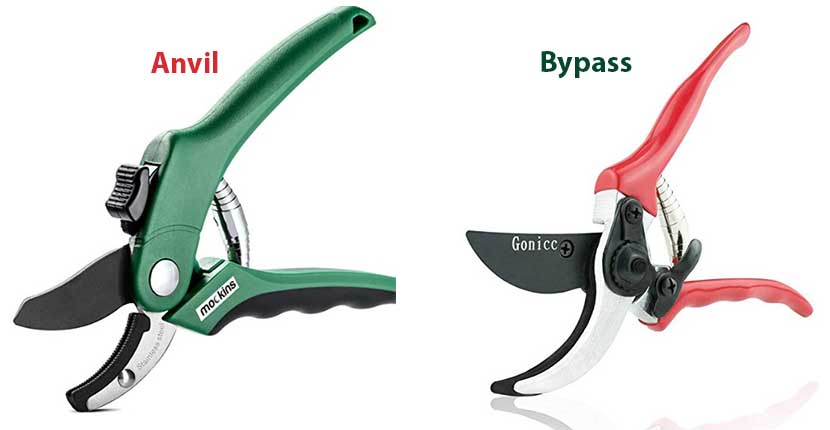 Anvil and Bypass Secateurs are the two main types of secateurs every gardener should have. When purchasing the pruners for the first time, it can get challenging to figure out which is better.

This anvil vs bypass secateurs guide will explore everything you need to know about the pruners to help you can make an informed decision.

What are Bypass Secateurs

The bypass pruners work in the same way as scissors since it has blades that crisscross to make a cut.

The Use of Bypass Pruners

Bypass pruners are great at pruning or cutting “live” material from soft tissues plants such as woody shrub branches, flowers, fruits, and vegetables. The pruner uses a by-pass motion which means that you can hardly smash the tissues on the plants.

Its ergonomic design also makes it easier to get to the part that will be left such as the fork in a branch to the buds of a stem. It is also useful when cutting the trunk of a small tree. With the bypass secateurs, you need to keep sharpening the cutting blades as it dulls over time. You can also use it on “dead” materials such as stems and small branches.

Check this too: How to Stop Tree Branches from Growing Back

What are Anvil Secateurs?

The Anvil pruners feature a blade on one side and anvil (flat bottom) jaw with a groove. This pruner makes a smash cut with the stem on the anvil jaw or side. The anvil and blade create a cutting board type of situation. Think of it as putting something on a chopping board.

Anvil Secateurs are designed to cut dead wood. It can be used on live wood but it has the tendency of damaging or smashing the parts left on the plant. If you’ve got plenty of dead limbs and stems this is a pruner that is worth your investment.

Check this too: Best Secateurs For Small Hands

Which is best between anvil and bypass secateurs?

There are no better secateurs between the two. The only determinant is how you intend to use them. If you are looking to prune flowers and shrubs, go for the bypass, but if you want to cut dead stems, consider the anvil pruner.