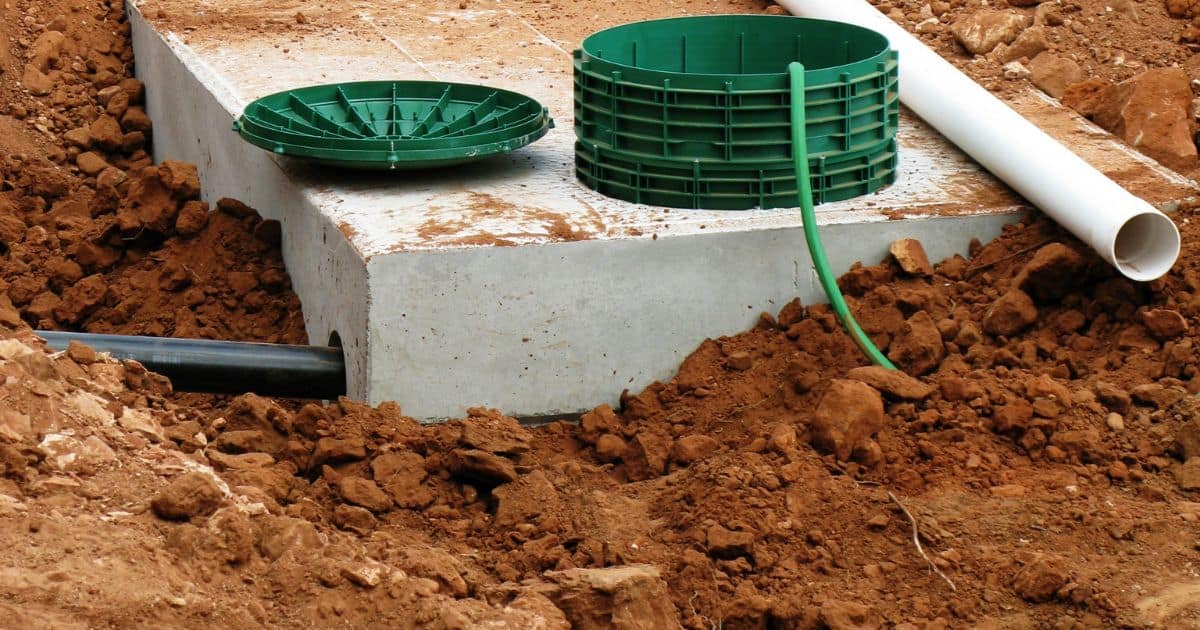 How often you clean your septic tank depends on your type of family and the expected use of the home. On the other hand, to understand what causes a septic tank to overflow, you must first understand how it works.

Knowing the functional purpose of each component of the septic tank will give you an added advantage while troubleshooting. The septic tank and drain field are designed to handle a maximum amount of sewage daily. Exceeding this limit consistently will lead to an overflow and eventually cause failure.

A healthy septic tank has its ecosystem living inside it. Which is made up of organic bacteria and enzymes, which are the good bacteria that clean the septic tank.

The organic bacteria work by breaking down the solids such as fat, grease, and sludge, which then get absorbed through the leach lines surrounding the fields.

Are you aware that some of our cleaning products kill the ecosystem? And without the organic bacteria and enzymes, the wastewater in the septic tank cannot be treated. This then leads to the build-up of unnatural amounts of sludge, fats, and grease at the bottom of the tank.

This sludge eventually builds up and reaches the outlet pipes and arteries. This causes the waste to rot and fester, releasing gasses with a foul smell.

This is how you end up with choked and clogged pipes. That causes the septic tank system to stop working, overflowing, and back into the house drainage system.

In case this happens, you could choose to rod up the system. Especially when sanitary towels and baby wipes are stuck in the pipes. Rods are great for dislodging this type of debris hence unblocking the pipes.

If not that, jetting would work as well. This involves blasting high-powered water into the septic tank and trying to unblock the pipes.

While it may help and remove some clogging, jetting might end up causing more harm than good. The reason being the soak-away is usually surrounded by soil. Hence, when high-powered water hits, the fat and the grease just compress. You might end up making the situation even worse.

Another option would be emptying the septic tank. It does get rid of the wastewater; however, the fat and grease might remain inside the pipes. Especially those that lead into and out of the Septic tank and later lead to blockage of the entire system.

These methods used above might lead you to ask questions such as; how can I keep the pipes unblocked without the fat and grease? At the same time, keep off the foul smell? By using soakaway worms.

Once poured into the septic tank, these soakaway worms quickly adjust to their new environment. Then they start burrowing and working their way into the fat and grease.

Another added advantage is that they easily breed and multiply while making their way deep into the nooks and crannies of the pipes.

These worms eat all the fat and grease. In this way, they clean and unblock, causing the wastewater to flow freely and naturally. Through the soak away into the soil. This method is very cost-effective, easy to install, and a one-off treatment. Moreover, very good preventive measures against an overspill.

Whichever method you choose, it is always advisable to use bacteria additives. Most of them are made of soluble water sachets that dissolve to release millions of good bacteria and enzymes.

You must flush the toilet once the additive has dissolved, and the bacteria will make their way down the pipes that lead to the septic tank. While at the same time removing the fats and grease.

Once the bacteria get into the septic tank, instantly get to work. Getting rid of all the material causing blockage, thus getting rid of that foul smell. Moreover, it protects the ecosystem from the effects of the cleaning products.

So what are some Do’s and Don’ts concerning the septic tank? Let’s begin with the Dos.

Some of the things that you should avoid to keep your septic tank healthy include scraping food off the utensils before cleaning them. Not putting plastics into the tank.

Planting anything over the leach field except for grass is also not a good idea. Or overload the septic system all at once. Perhaps have a schedule for cleaning different things on different days of the week.

Avoid covering the septic tank with asphalt, concrete, or brick. And last but not least, don’t flush anything other than toilet paper and human waste down the toilet.

The main reason for an overwhelmed septic tank is its drain field. Being the only exposed part of the septic system, it comes into contact with the rainwater, eventually causing plumbing issues.

Chances are very small that your flooded septic tank will fix itself. Especially with a yard spillage which occurs when a pipe breaks or loosens from a backup.

It could be tree roots interfering with the pipes or the corrosion of the old pipes. Not forgetting heavy rainfall.

The soil around the septic tank and drain field might become saturated when it heavily rains. Causing the effluent from the septic tank not to properly drain through the soil. This is to mean that the drainage field is clogged hence not draining at the proper rate.

If the spill is minor, begin by isolating the affected area to prevent further contamination. While keeping items out of reach of the contaminated area.

After that, generously sprinkle garden lime until the area is covered with white. Let it sit for 24 hours. Once the lime has dried, shovel it into a double heavy-duty trash bag.

Then use a hose pipe or sprinkler to water the area. Avoid raking the affected area for some time because sunlight aids in killing the bacteria from the sewage.

You could also opt to neutralize the spillover with undiluted white vinegar. It has the added advantage of getting rid of the bad odor.

However, if the spill is major, contact a professional. To avoid causing more harm than good.

To relieve the pressure in the septic system that causes back-ups, use it less. If possible, eliminate the water going down the pipes until the drain field dries out. On the other hand, you could opt for emergency septic service cleaning.

There are some preventive measures you could take to avoid backups. They include;

To know if your septic tank is overwhelmed, you will begin by experiencing plumbing issues. There will be an overflow in the toilet and drainage system.

The septic water will not get soaked by the soil hence causing a bad odor and puddles of overflowing sewage at the same time.

The drain field receives wastewater from the septic tank by gravity. It consists of a network of perforated drain pipes, crushed stones, and an unsaturated soil layer.

When constructed properly, it would serve you for decades. It ensures the wastewater is well treated before being returned to the water cycle.

Normally, the wastewater flows through the drainage field, and a black gelatinous layer develops under the distribution lines after some time. It is known as biomass.

Even though it is beneficial in the infiltration process by retaining the organic bacteria and enzymes, it might cause serious problems after a while.

This is because the more the sludge accumulates in the trenches, the more it will be hard for the wastewater to infiltrate. Hence causing sewage spillage and backups.

When this happens, the goal should not be to eliminate the biomass but rather to restore the biological balance in the system. You do this by unclogging the drain field by adding biological enzymes. They will digest the organic waste hence unclogging it.

In the end, maintenance is the number one preventive measure. It will help with keeping the sludge, fat, and grease at a manageable level. It will also help with identifying potential problems that are about to occur.